Welcome to another edition of Elf Take!  I’m your host, Skip Tasteless.  Today we are heading back to the Old World Football League and reliving the exciting AFC conference championship between the Darkside Marauders (9-4-3) and the heavy favorite Brackish Brawlers (13-3-0).  As a high elf, you know I love my one turn TDs!  Today’s game, however, has you pitted against a different challenge…  Now you’re trying to prevent one against a devilish skink named Six, a phenom with MV9, AGI 4, Sprint, Side Step, and Sure Feet!  Good luck!  Mua ha ha!

It’s turn 16.  The coach for the Marauders jasfoz22 has fought valiantly and has whittled down Darken-Rahl’s Brackish Brawlers to 7 players.  Not only that, but he was able to score the game-tying TD on his last turn!  The Brawlers still have one turn left, and Six is in the backfield licking his chomps for the ball!

You’re the Chaos coach.  The Brawlers don’t have any rerolls left.  What’s the best defensive formation that will prevent the easy 1 turn TD?  With side step, Six has to be chain pushed once before he can run the entire length of the field for the score.  What play do you call? 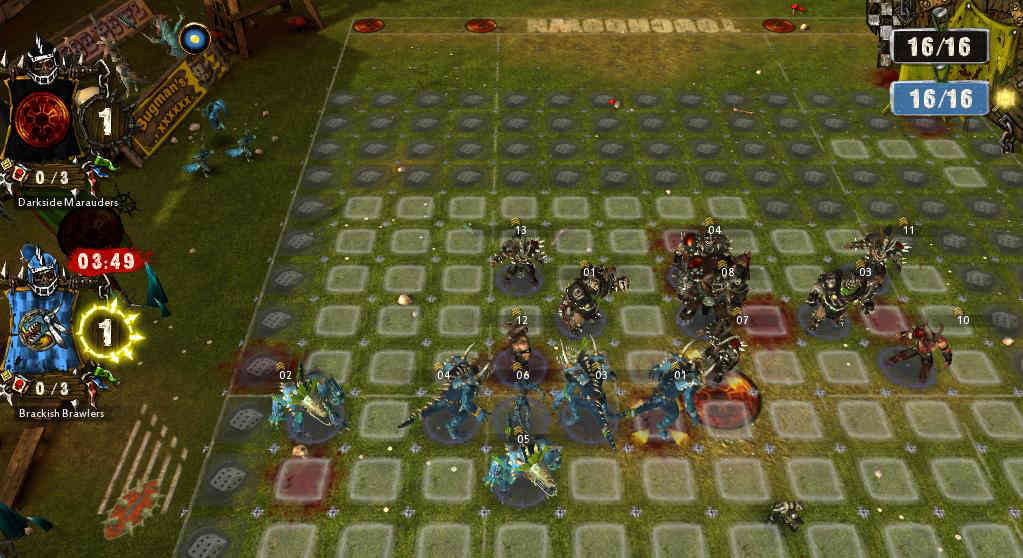 The Brackish Brawlers scored with this formation. Could you devise another defensive formation that would complicate the Brawlers’ one turn TD attempt?

In the actual game Darken-Rahl was able to score by:

According to the Samba Action Calculator, the touchdown Darken-Rahl scored with Six had a ~49.394% chance of success.  After setting up your defense, figure out the best way to one turn TD against it and see if you can get a lower score.

Samba Results for the touchdown Six scored. Can you setup a defense that would force more die rolls?

This is a great solution.  The sidestep Chaos Warrior is an excellent obstacle to a one turn TD.  The STR 6 Chaos Warrior also makes it difficult to chain push as well.  It can be done, but if a blitz is used to push the the STR 6 Chaos Warrior towards the center of the field then Six will end up in tackle zones that will hinder his catching.  But there is still another way to go after it…

Tas30’s solution effectively cuts the chance of scoring in half.  The biggest probability sink within the entire chain of events is the required push result on the first 2D block by Saurus #2.  Can anyone think of a better defensive setup or offensive attack against Tad30’s solution?  Let me know!

Keep Up to Date

For more in depth discussion or advice, sign up to our Blood Bowl Forum.

To make sure you never miss a post, why not subscribe via email or add BBTactics to your RSS reader.

Leave a Reply to Melian Click here to cancel reply.

BBTactics uses cookies to ensure that you get the best experience. If you continue to use the site I will assume that you are happy with it.Ok